Berlin Brass - French Horn SFX features two patches based on Orchestral Tools‘ FX Builder Engine: The Random Staccato patch and the Cluster Builder. Both patches use a similar GUI, but differ in their usage. Both patches are described in the following section. 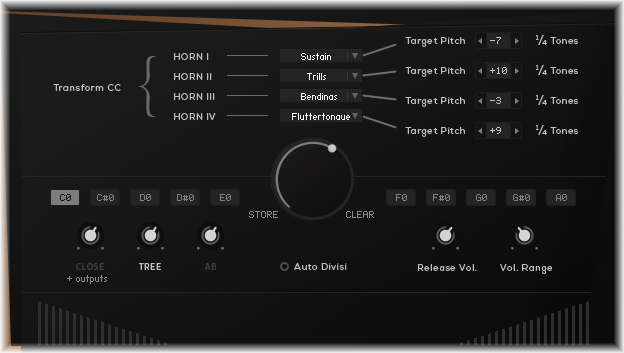 The Cluster Builder marks Orchestral Tools‘ newest approach on solving a problem that has existed ever since the advent of sampling: How to create ultra-realistic effects that adapt to what the user wants to write without overly complicated calculations or resorting to pre-recorded loops, which lack flexibility?

The Cluster Builder, in a nutshell, gives you access to the four horns in our section. We recorded Sustains, Bendings, Fluttertongue, Trills and Stopped Sustains for each horn. The script lets you play each horn with its individual articulation independently from the others. So one horn can play sustained notes, while a second horn performs a trill, a third plays bendings and the fourth horn will join in playing fluttertongue.

In addition, you can select a target pitch for each horn individually. The target pitch determines how far the horn is allowed to stray from the tonal center (= the key you pressed) when playing a cluster. This setting is of course automatable as usual by assigning a CC (right-click on any target pitch box to assign one).

The transform feature now is where the magic happens: Move the CC assigned to the Transform knob to morph from playing unison in the chosen articulation to playing at the target pitch. This means that, with a target pitch of 3, the instrument will sound 3 quarter-tones higher when the Transform knob is set to maximum. Values in-between will result in something somewhere in the middle (go figure!). The transition is absolutely seamless - this way you can morph in and out of a custom cluster in exactly the tempo you need. By default, all four horns will play when you press a key. Pressing multiple keys results in an increased number of instruments sounding.

To help you create clusters with realistic voice distribution and the ability to have instruments come in one after another, we implemented a divisi feature: The Auto Divisi button distributes the notes you play to the four horns. The first note will go to the first horn, the second to the second, and so on. When the Auto Divisi button is enabled, a selection menu will appear where you can select the order in which the four horns are played. So for example if you want the third horn to play the second note you press, you can change the order here. To reset the counter (so the next note you play will be treated as the first in sequence), press C0. 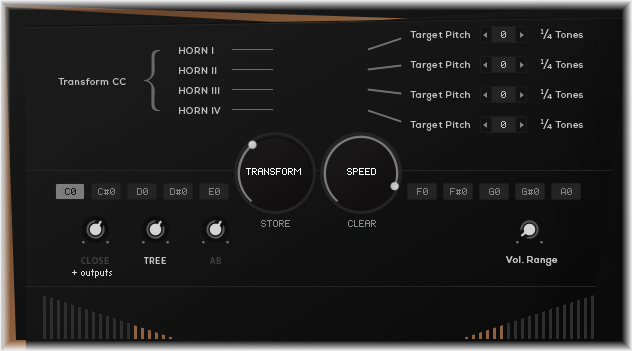 Random staccato notes are a powerful effect, not only for creating a general feel of uneasiness in a piece by working against the rhythmic backbone, but also (and even more so!) by using variable pitches, adding an (a)-tonal layer. Try using this effect subtly in pieces otherwise rooted in traditional harmony - the effect is staggering, especially at low velocities!

The Cluster Random Staccato patch works in a similar way to the Cluster Builder. You set a target pitch for each horn and use a pre-defined CC to transform the sound from the root note (the note you play on your MIDI keyboard) to the maximum pitch. In addition, there is a speed dial, which controls the frequency of random notes. Of course this parameter is automatable, too.